First, in case you don’t get the reference. Go here: Hyperbole and a Half

Well as usual, this summer is  flew by. We got back from vacation  six weeks ago and it immediately became crunch time. I’ve started several different posts with updates on the various things we’ve been up to over the past few weeks but it has been one of those seasons where actually getting things done in real life has been more important than documenting it for the internet. Andy is one week in to his second rotation of third year and our sweet little bebe is due in 2! days so I figured I’d gather all the post snippets that I have from the summer and link up with 7 Quick Takes hosted this week at Fountains of Home.

I started July off by jumping right into our summer house renovation projects which will hopefully get a post or two on the blog once we finish them up. First on the list was turning our guest room into our office. Because we bleed Tribe Pride forever and ever we decided to paint the office William and Mary colors. We even took the official style guide into Lowe’s and color matched the paint. #TWAMP alert. I was nervous that the colors would be too dark in such a small place but I love it. As in I loved the colors so much that I was sad to move furniture in there because it would cover up some of the walls.

We are now nearing completion of the massive summer project to-do list which included repainting every bedroom in our house and refinishing the deck. All of the must-get-done-before-the-baby-is-born items have been completed and now I’m just working on wall decor and Andy is finishing up a few things outside. It was a lot of work and we wouldn’t have finished it nearly as quickly without help from family and friends but I am so glad that we did it. We didn’t change anything about the house when we first moved in and now it feels a little more like ours.

Mid-July we took off on our big traveling bonanza for the summer. Andy stayed back to take his first of many board exams while I went to DC to celebrate my college roommate’s wedding. Afterwards, I spent a few days with my family and then we reunited at the beach with Andy’s extended family for a few days of vacation. I keep thinking that eventually we’ll take a vacation in the style of travel to a place, stay there for a week, come home but that doesn’t seem to be our style right now.

3 // Our Brothers Got Married

Between the two of us we have two brothers and their weddings bookended the summer for us. We kicked the summer off with Andy’s brother’s wedding in May and wrapped it up with my brother’s wedding in August. It was fun to celebrate and to see family. At both weddings I was struck by how mature each of them have become. I could see the ways that they’ve stepped up to be leaders in their new families and I just felt so proud of them.

I graduated with my M.Div. in May and while I am incredibly thankful for all that I learned in the 4 years it took me to complete the degree, I am also really glad to be done. It still feels a little weird for the school year to have started and not be signed up for any classes.

Our friends and family have been so generous to us as the arrival of our new addition approaches. We ended up having three baby showers. Andy’s extended family hosted one for us at the beach, my work had one, and then our dear friends in Pikeville hosted another shower for us. I feel pretty sure that Baby French is not going to be wanting for anything! 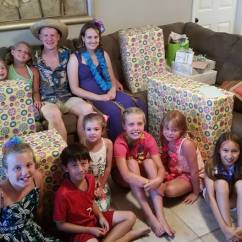 Last weekend, my Uncle passed away and it was particularly hard not to be able to travel home to be with my family. Even though I wasn’t able to be there in person, we used facetime so I could be there for the funeral. During the funeral there were several things that crossed my mind, but one thing struck me in particular about technology. So often I lament technology for the disconnectedness it enables but in that moment I thought, “This is it. This is what it was made for.” Instead of disconnecting me from my world, it allowed me to be part of a moment I would have missed hundreds of miles away. It was another reminder that the things in this world are just that – things. It isn’t the object that is inherently good or bad, it is how we use it.

I don’t know what the last few weeks of pregnancy look like for most people but for me it initially looked like a constant litany of “Lord, please just give me enough time.”

I tend to be a person who is working on a project right up until the deadline and having a four week moving target for when the baby could realistically be born was enough to make this girl crazy. On the one hand, I should have enough time to get all that I want to do accomplished but on the other, I might not. Let’s just say surrendering control isn’t my strong suit.

A couple of weeks ago, Andy instituted a “Well Rested Regimen” in our house. He insisted that no matter what we were working on, we were going to make sure to get eight hours of sleep each night. While it did have the significant benefit of making us better rested, it also forced me to realize that my real struggle was in trusting God to take care of us. The root of it all was a fear of failure and a lack of trust. It  can be easy to have a head knowledge of God’s goodness and provision, but it is another matter entirely to live in that truth.

1 thought on “Quick! Recap *ALL the things*”